CdS quantum dots belong to group II-VI materials with an energy band gap of 2.42 eV and are typical semiconductor inorganic crystals with nanometer size of 2-10 nm. due to their unique optical and electrical properties, CdS quantum dots have a wide range of promising applications in the fields of solar cells, transistors, photocatalysis, bioimaging, nanomedicine, molecular pathology, antibacterial activity and drug delivery.

Methods for the Preparation of CdS Quantum Dots

Quantum dots also have a wide range of applications in the field of biomedicine. Currently, there have been in-depth studies in biomarkers and biological imaging, cell toxicology and cancer cell therapy. Shivaji et al. found that low-dimensional (less than 10 nm) semiconductor quantum dots have potential application value in biomedical diagnosis and therapy. In this study, CdS quantum dots with particle size of 25 nm were prepared by green synthesis method. Experimental results show that CdS quantum dots can effectively inhibit bacterial growth and show cytotoxicity to A549 cancer cells. To further explore the role of CdS quantum dots in bioimaging and cytotoxicity of A549 cells, immunofluorescence and flow cytometry were used for analysis. Flow cytometry analysis showed that CdS QDs inhibited the growth of A549 cells during the S phase of cell cycle. In order to further improve the biocompatibility of quantum dots and reduce their toxicity, scientists prepared silk protein coated cadmium selenide quantum dots by γ-ray irradiation method, and explored their biocompatibility and cytotoxicity in living cells. This complex has potential application value in tumor imaging and treatment. 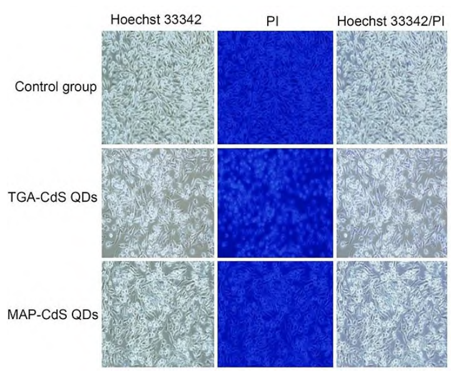 Solar energy is an inexhaustible and environmentally friendly source of energy. So far, scientists have explored many technologies to convert solar energy into electrical energy, among which, the most researched are solar cells, because solar cells can convert sunlight directly into electrical energy through the photoelectric effect. Semiconductor CdS QDs have good optical properties and high absorption coefficients, making them widely used in the field of solar cells. Semiconductor quantum dot solar cells (QDSCs) are arguably one of the most promising nanostructured solar cells for research.

Fig.2 Schematic of application of the anti-reflection layer in the quantum dot sensitized solar cell. (Farahani, 2020)

CdS QDs are widely used in fluorescence imaging because of their special photophysical properties, such as strong fluorescence emission wavelength and resistance to photobleaching. Zhou et al. designed a novel fluorescent probe detection mode to achieve rapid analysis and detection of Cd2+ in aqueous environment. The addition of Cd2+ rapidly transforms ZnSe QDs into ZnSe/CdS nanosystems with a core-shell structure, enabling ratiometric fluorescence detection. The probe has good selectivity and anti-interference ability, and the detection mechanism is based on the change of quantum dot energy band energy caused by heavy metal ions, which provides a research idea for the selective and sensitive detection of other heavy metal ions.