CdS quantum dots-PMMA powder is a semiconductor nanoparticle with a light emission peak in the range of 550-660 nm. The CdS Quantum Dots are stable with oleic acid ligands and can be used as solutions in various organic solvents (e.g. toluene, hexane, methanol or water).

Cadmium sulfide (CdS) quantum dots (QD) were prepared in dimethylformamide using a microwave (MW) assisted synthesis method in the presence of polymethyl methacrylate (PMMA). MW irradiation was carried out for a fixed time of 20-30 s and the size of the quantum dots ranged from 2.9-5.5 nm. MW irradiation selectively affected the nucleation and growth rate of the PMMA-CdS QDs system. The +2 valence-rich PMMA-CdS QDs are due to surface trap state photoluminescence. The complex of shallowly trapped electrons and shallowly trapped holes is believed to be the main source of surface trap state photoluminescence in Cd ion-rich PMMA-CdS quantum dots. A sharp decrease in the photoluminescence lifetime is observed when the number of quantum dots is small, indicating that the emission decay depends on the surface properties of PMMA-CdS QDs. The origin of the longer lifetime is due to the involvement of surface trap states and depends on the amount of CdS QDs present in PMMA and its environment.

The size tunability and enhanced optical properties of cadmium sulfide (CdS) nanoparticles in a poly(methyl methacrylate) (PMMA) matrix were investigated by Padmaja et al. Three-dimensional quantum confinement of CdS in PMMA matrix was achieved by in situ technique. x-ray diffraction results showed the presence of CdS in PMMA matrix when the concentration of CdS nanoparticles was high (1:20). particle size and energy band gap were determined by UV-visible spectroscopy. The photoluminescence spectra showed that the radiation trapped on the surface broadened and shifted towards the blue region. The formation of CdS and its stoichiometric ratio were determined by x-ray photoelectron spectroscopy. Transmission electron microscopy results showed that the nanoparticles were uniformly distributed in the PMMA matrix. 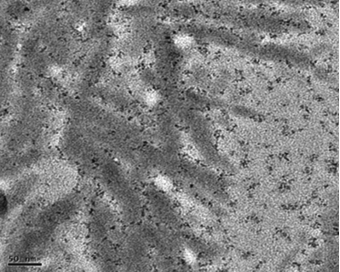