With the development of agriculture and industry, various materials such as nanomaterials, heavy metal materials, and the accumulation of other biomass materials have obvious physiological and toxicological effects on the growth, development and reproduction of living organisms. Zhang et al. investigated the biosafety of CdS/ZnS quantum dots from the growth and development to the genetic level using Cryptomeria hidrophila as a research object. It was found that the exposure of CdS/ZnS quantum dots not only inhibited the biological behaviors such as body length, head swing and body bending, but also affected the expression of nematode cytotoxicity-related genes, stress-related genes and cell growth and development-related genes. When the exposure concentration of CdS/ZnS quantum dots was 3.33 nmol/L, the nematode body length, head oscillation and body bending decreased from (0.64±0.072) mm, (55.94±7.17) times/min and (9.95±2.42) times/20 s in the blank group to (0.48±0.099) mm, (15.83±6.76) times/min and (7.72±1.7) times/min, respectively. min and (7.72±1.12) times/20 s; while the expression of GST-1, daf-21, and HSP-16.4 increased 15.33, 19.51, and 35.01-fold, respectively.

Su et al. prepared CdS/ZnS core-shell microspheres using a simple two-step method combining ultrasonic spray pyrolysis and chemical bath deposition. The photocatalytic performance of the core-shell structure was superior to that of Cd or ZnS spherical particles. CdS/ZnS photocatalysts loaded with different amounts of ZnS as the shell layer were prepared by adjusting the concentrations of Zn and S precursors during the synthesis process. The optical properties and photocatalytic hydrogen production activity of the catalysts were examined, and the amount of loaded ZnS was optimized. By thermal annealing and hydrothermal sulfidation of the core-shell structure, the crystal defects and surface states were eliminated, and the photocatalytic activity and stability of the material were improved. 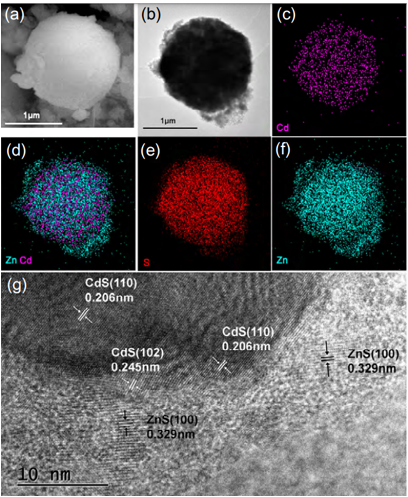