Core/shell quantum dots are the product of further engineering in quantum dot (QD) structures. Due to the shell surrounding the core of QDs, they exhibit better optical properties than simple QDs, leading to improved stability and photoluminescence efficiency. QDs have a high surface area-to-volume ratio, and there are unsaturated or dangling bonds on the surface. These undercoordinated atoms make them more active than atoms in most QD materials. Coating QDs with appropriate materials to form core/shell QDs enables them to exhibit higher quantum yields and higher stability than core QDs; the growth of the shell both limits the excitation of the core and protects the core from Oxidation and chemical degradation.

Novel solid-phase luminescence sensors (SPLS) based on molecularly imprinted polymers (MIPs) as recognition elements and semiconducting CdSeS/ZnS alloy quantum dots (QDs) as phosphors have been synthesized and developed for the determination of sulfadiazine. Surface-modified quantum dots are attached to the surface of the glass sheet. MIPs and non-imprinted polymers (NIPs) with sulfadiazine (SSZ) recognition sites were synthesized and attached to immobilized QDs. Ahmadpour et al. used fluorescence spectroscopy to determine trace amounts of sulfadiazine, which is based on the quenching effect of sulfadiazine on the emission of QDs and the fluorescence resonance energy transfer (FRET) mechanism. Compared with the NIP-QDs-based sensor, the MIP-QDs-based sensor showed high recognition ability for sulfadiazine. Various experimental parameters affecting the fluorescence intensity such as reaction time and pH were studied and optimized. Under optimal conditions, the MIP-QDs sensor exhibited good linearity for sulfadiazine in the range of 0.02-1.5 µmol L-1 with a coefficient of determination (R2) of 0.9986. The detection limit (S/N=3) and quantification limit (S/N=10) were 0.0071 and 0.024 µmol L-1, respectively. 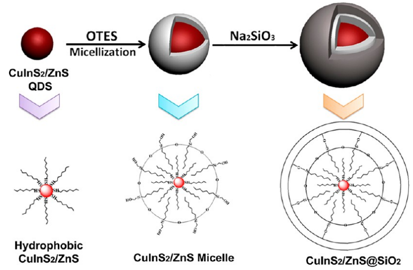 Alfa Chemistry can provide a variety of complex and customized core-shell fluorescent quantum dot products. Our products involve a variety of fluorescent quantum dot products. Alfa Chemistry provides products with high fluorescence quantum yield, stable quality and relatively low price. Our products are constantly updated. If the product you need is not in our catalog, please feel free to contact us, we provide relevant custom services.