Alfa Chemistry provides water dispersible carbon quantum dots with excellent optical properties, good water solubility, low toxicity, environmental friendliness, wide source of raw materials, low cost, good biocompatibility and many other advantages. The surface functional group is carboxyl/amino, which can be coupled to amino or carboxyl groups of biomolecules. Its fluorescence emission peak can be covered, the wavelength of the product has a wide wavelength range of 430-620 nm. It can be applied to biological multicolor fluorescent labeling, photoelectric conversion, sensor and other application fields.

Tang et al. reported the synthesis of water-dispersible carbon quantum dots (CDs) by a one-step hydrothermal method using polyamides (PAMAM) and (3-aminopropyl)triethoxysilane (APTES) as a platform and passivating agent. The resulting CDs were highly homogeneous and finely dispersed. the synergistic effect of PAM and APTES on the CD surface resulted in a much brighter fluorescence than that of the CDs modified with only APTES or PAM. The fluorescence of the co-modified CD was quenched by Hg(II) ions at a rather low concentration. Under optimal conditions, the intensity of the quenched fluorescence decreases with decreasing Hg(II) concentration in the range of 0.2 nM to 10 μM, with a detection limit of 87 fM. The effect of potentially interfering cations on the fluorescence shows a high selectivity for Hg2+. The fluorescent probe was applied to determine (spiked) Hg(II) in water and milk with recoveries between 95.6% and 107% and relative standard deviations between 4.4% and 6.0%. 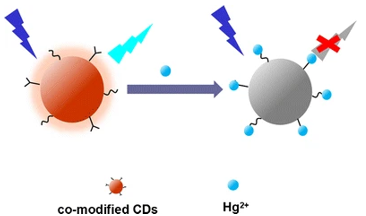 Liu et al. successfully synthesized ionic liquid modified carbon dots (CDs-IL) by a one-pot pyrolysis method. The tribological properties of CDs-IL as a water-based lubricant additive were investigated in four-ball mode. The experimental results showed that the added CDs-IL not only improved the load-bearing capacity of the base fluid, but also exhibited significant friction reduction and anti-wear properties. At an optimum concentration of 0.05 wt.% and an appropriate load of 50 N, the average friction coefficient and wear were reduced by 65% and 60%, respectively. The significant lubricating effect of CDs-IL was attributed to the formation of a boundary triple layer film by absorption and deposition of CDs-IL on the friction surface. At loads below or above 50 N, the lubricating effect of CDs-IL, especially the anti-wear effect, was greatly reduced because the function of the deposited triple-bubble film formed by CDs-IL was inhibited by the absorbing triple-bubble film or the tribochemical film derived from the triethanolamine in the base fluid, respectively.